Spring Training In Arizona With The Cactus League 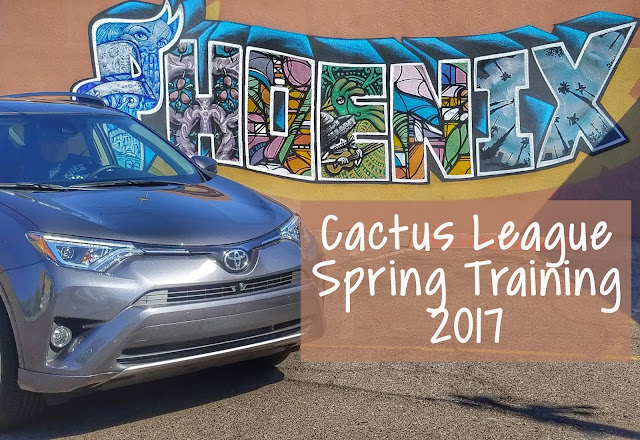 An advantage of living in San Diego is that I am only 5.5 hours away from the Phoenix metro area by car to see the "Boys Of Summer" in Spring Training.  My husband and I have done this trip a few years back but this time Toyota invited us an epic spring training trip we could not refuse!

Toyota dropped us off a Rav4 Platinum Edition for the ride to Phoenix and back and I was pleasantly surprised at how roomy it was.  The trunk was huge for a small SUV.  We do not mean to travel with a lot of stuff for a couple of days but it just happens, hehehe so we were happy for large amount of space.  I wish I could tell you more about the drive there but I passed out in the passenger seat and did not wake up till Goodyear Ballpark!  I am assuming the drive was nice and smooth or I would not have fallen asleep.

I was very excited to be at the home of the Cleveland Indians spring training!  I was born in Cleveland so I support the CLE with all my heart!  The ballpark was very nice with the mountains in the background and the beautiful puffy clouds and most importantly the temperature was 75 degrees. Of all the Spring Training facilities Goodyear is the furthest away.  All of the Ballparks in the Cactus League are within the Phoenix metro area so the furthest with traffic you have to drive is around an hour to get from one location but most are closer to each other.  This differs from the Grapefruit League where the rest of the teams practice in Florida as they are spread all over.  For me Arizona Spring Training is where it is at for me with the Indians, Cubs, and Padres!

There are plenty of great options for lodging depending on what you want to spend.  We stayed at Talking Stick Resort and Casino in Scottsdale which is always wonderful.  This is our second time staying there and I could definitely see staying there again.  I love that each room has a separate bathtub and shower.

On our first full day of Spring training we went to see the San Diego Padres take on the Texas Rangers. While the Padres did lose the game it was great to see the Surprise, AZ ballpark.  Yes, I know it is just a ballpark to some people but I enjoy seeing how each team or teams make the ballpark theirs. The other great thing about this game was that Toyota got us amazing seats right behind the Padres dugout so we could see all the players up close and personal.  Luckily for us, all of our first string players were playing!

Our last day of Spring Training we saw the Padres take on the San Francisco Giants at the Scottsdale Stadium. Under advisement from other people we were told to get to the ballpark early because it is hard to get parking here since the park is in the middle of old town Scottsdale. We were actually really early but enjoyed walking around this ballpark because you could see the influence of San Francisco everywhere.  This is probably due to the fact that they do not share this park with anyone else.  Most teams share their park with one other team which is actually really cost efficient if you think of team costs.  You definitely could tell Giants were representing I think 95% of the spectators were Giants fans.  LOL!

Other things to know about spring training is that many ballparks charge $5 or $10 for parking.
Only a few are free so make sure to have some cash on you. Below I listed some more tips to make sure you have a great time!

The Toyota Rav4 was perfect for the long driving and the short little jaunts.  I became a huge fan of the air conditioner.  It definitely cooled us down quickly after being in the hot sun!  We drove to a couple of restaurants while we were in town.  One night we met up with some blogger friends at Four Peaks Brewery and had some great food.  Another day we went to Barrio Cafe which was amazing!  I was able to get one of my favorite dishes Chiles En Nogada.  Take a look at the picture it is so yummy with a walnut cream sauce and meat and fruit filling...yummy!  The most interesting place we ate was the first night we got there at the top of Talking Stick Resort called Orange Sky.  Here we met Toyota and all the other bloggers who came for this event.  We had amazing food but the views were spectacular.  You could see forever and the sunset was fabulous.  They even have private dining tables with curtains looking out over the sunset if you wanted to have a romantic dinner.

We had such a great time and want to send a huge thank you out to Toyota for inviting us and making this such a great experience for us and one we will never forget.
Posted by Heather at 3:37 PM